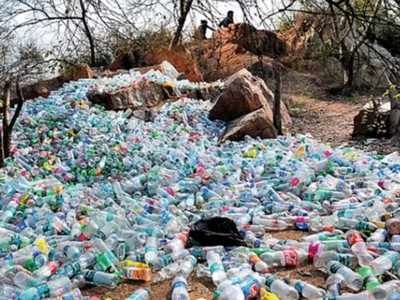 NEW DELHI: Seeking to make India single-use plastic-free by next year and deal with the menace of huge uncollected plastic waste across the country, the Centre on Thursday notified ban on the use of ‘single-use plastic items from July 1 next year and increased thickness of polythene bags from 50 microns to 120 microns.
The thickness clause will, however, be implemented in a staggered manner in two phases, beginning September 30
Currently, polythene bags of less than 50 microns are banned in the country. But under the new rules, polythene bags of less than 75 microns in thickness will be banned from September 30 and bags of less than 120 microns will be banned from December 31 next year.
The notification, issued by the environment ministry said hat the manufacture, import, stocking, distribution, sale and use of single-use plastic, including polystyrene and expanded polystyrene, commodities will be prohibited with
effect from July 1, 2022.
Such 'single-use plastic items include earbuds with plastic sticks, plastic sticks for balloons, plastic flags, candy sticks ice-cream sticks, polystyrene [thermo-col] for decoration;
plates, cups, glasses, cutlery such as forks, spoons, knives, straw, trays, wrapping or packing films around sweet boxes, invitation cards, and cigarette packets, plastic or PVC banners less than 100 micron and stirrers.
The staggered plan on thickness clause has been approved so that it doesn't affect small businesses and traders. The ministry had March notified the draft. The final decision was notified on Thursday after considering the views of stakeholders on the draft.
The notification also for the first time defined the ‘single-use plastic and identified such items which are to be banned in a staggered manner. It says “single-use plastic commodity”
means a plastic item intended to be used once for the same purpose before being disposed of or recycled.
An increase in the thickness of carrying bags, made of virgin or recycled plastic, will substantially improve the collection and recycling of used carrier bags. The move assumes
significance as currently, 40% of total plastic waste remains uncollected in the country every day.
The uncollected plastic waste causes choking of drainage and river systems, soil and water contamination, littering of the marine ecosystem, ingestion by stray animals, and open-
air burning leading to adverse impact on human health and the environment.
Under the notification, it will be the responsibility of urban local bodies and ‘gram panchayats’ for setting up and coordinating the waste management system and for performing the
associated functions such as ensuring segregation, collection, storage, transportation,processing and disposal of plastic waste.
The provision of thickness will not be applicable to carry bags made up of compostable plastic. The manufacturers or sellers or brand owners of compostable plastic carry bags will have to obtain a certificate from the Central Pollution Control Board before marketing/selling or using those stuff including plastic packaging materials.
More News  Post Your Comment